How Breakthrough Students Give Back

Student Teachers at St. Edward’s Are Inspiring First-Generation Students Like Them to Graduate from College

For low-income students hoping to become first-generation college graduates, seeing themselves as capable of success is often one of the biggest barriers. The university’s partnership with Breakthrough Central Texas is helping to change that.

Adriana Reynoso ’22 stomped her boots on the slick green grass to warm her toes as the wind whipped her hair across her frozen nose. She shoved her numb fingers deeper into the pockets of her khaki coat and took a moment to capture the view in her mind’s eye. Swaths of sugar beets and just-harvested Riesling vines fluttered in the vicious wind. Fir and beech trees climbed the Vosges mountainsides, their crowns concealed by swirls of fog. Raindrops as big as pebbles pooled on rusty barbed wire and ran down the eaves of the austere crematorium. October had come to the Alsatian countryside — and to Natzweiler-Struthof, France’s only World War II concentration camp. 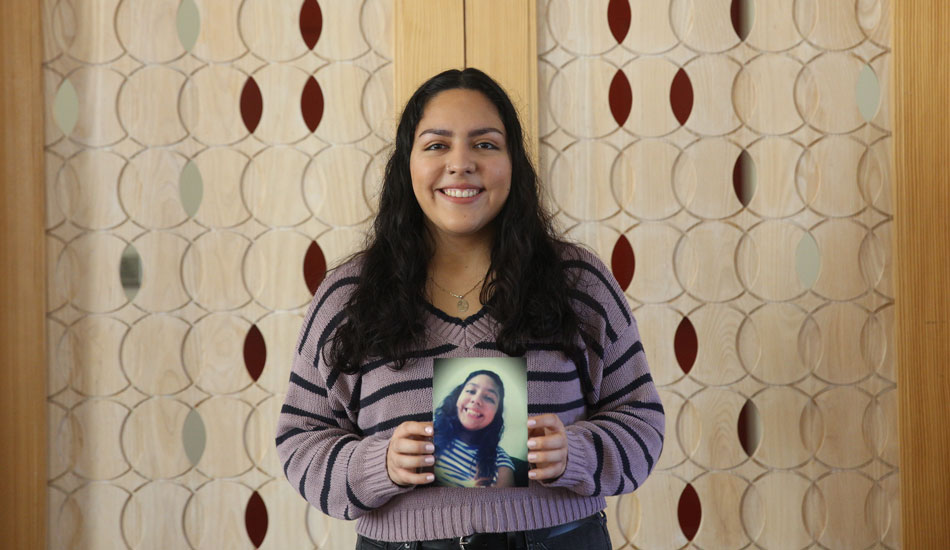 As she stood, Reynoso thought of the brilliant reds, blues, golds and purples of the intricate stained-glass windows that she and her classmates who were studying at Université Catholique de l’Ouest, a St. Edward’s partner university in Angers, had just seen at the Cathedral of Notre-Dame in Strasbourg. Light from a hundred flickering candles cast shadows across the smooth pews. The air was filled with a reverent stillness.

Here was humanity at its best and its worst, she realized, just 30 miles apart.

And all of it was a world away from the Austin neighborhood where Reynoso grew up. A native Californian, she had moved to Texas in kindergarten, eventually attending Manor Middle School and Manor High School, both federally designated as Title I schools with high percentages of students living below the poverty line. College wasn’t in the cards for Reynoso and most of her peers — in fact, only 6 percent of middle schoolers in low-income Central Texas households similar to Reynoso’s go on to earn a bachelor’s degree.

Reynoso is working hard to beat those odds. She enrolled at St. Edward’s after visiting campus with a high school classmate and an advisor from Breakthrough Central Texas, which provides resources and support to help low-income students become first-generation college graduates.

In middle and high school, students who join Breakthrough receive academic support after school and through weekend and summer programs, including preparation for standardized tests and help applying for college. They work one on one with an advisor, who serves as an advocate and mentor, and they participate in internships and projects organized by Breakthrough to build their leadership skills. When Breakthrough students enroll in college, they meet regularly with a college completion counselor who helps them navigate challenges like applying for financial aid, managing their time and talking with professors. 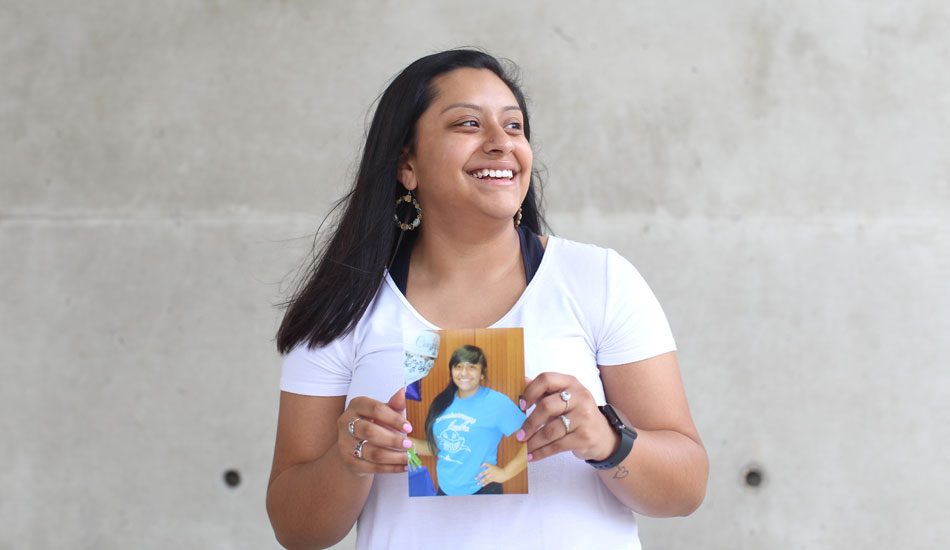 That care is often what low-income or first-generation students need most, says Griffith, Breakthrough’s executive director. “They need someone who believes in them before they believe in them, no matter what barriers they face.”

As Reynoso stands in her classroom this summer — her third as a teaching fellow — she wants to take that same personalized approach and instill that same sense of confidence in her students.  “They’re the future,” she says.

Last fall, as the wind whipped around her and she stood surrounded by the barbed-wire perimeter of Natzweiler-Struthof, she felt the weight of her responsibility as a citizen of the world — as someone who wants to teach citizens of the world. “Suddenly the history that I’d only read and learned about felt very real,” she says. “I realized we all have the chance to choose something different for ourselves and our community.”

Reynoso felt at home on the hilltop as soon as she visited, thanks to the peaceful campus and welcoming faculty and staff. In Fall 2018, she moved into Hunt Hall, joined the Social Justice Living Learning Community and started studying the history of the American school system. And, just as she had in middle and high school, she stayed connected to Breakthrough.

That’s in part because School of Human Development and Education Dean Glenda Ballard had made it a priority to partner with Breakthrough when she was hired in 2016. Ballard, a descendant of sharecroppers and a sixth-generation Texan, is a first-generation college graduate herself.

“There wasn’t anything like Breakthrough when I was growing up,” she says. “I was lucky that my group of friends wanted to go to college. We didn’t really have any idea how to make it happen, but we were each other’s motivation when things got tough.”

Then, after graduating from Texas A&M University–Commerce and earning her teaching certification, Ballard came to rely on her colleagues for professional and moral support as a novice English teacher at Commerce High School in the late 1970s. “Needing help and not knowing where or how to get it is a very lonely place to be, whether you’re trying to graduate from high school, get through college, or do your job,” she says. In the field of education, specifically, a lack of resources, training and support has taken a toll, with 50 percent of new teachers leaving the profession within five years, according to the U.S. Department of Education. Partnering with Breakthrough, Ballard knew, “would put even more resources into helping everyone — their students and ours — succeed.”

When Ballard approached Breakthrough Executive Director Michael Griffith, he immediately agreed to collaborate. “We knew a partnership would be successful because our missions are so much alike,” he says. “St. Edward’s is thoughtful about the student services they have in place. The student experience is of utmost importance to them, and their staff and faculty are accessible and approachable.”

“Needing help and not knowing where or how to get it is a very lonely place to be, whether you’re trying to graduate from high school, get through college, or do your job.” Glenda Ballard, Dean of the School of Human Development and Education

The university has welcomed Breakthrough middle schoolers to its hilltop campus on three Saturdays each semester for workshops. As the college students lead Breakthrough’s middle schoolers through a project — anything from designing their own energy bar to showcasing their community through photography — the 6th, 7th and 8th graders practice teamwork, critical thinking, problem solving, public speaking and more. They get the added benefit of visiting a college campus and interacting with college students and professors.

“It’s a chance for us to say, ‘I see you. I know what you’re dealing with. I’ve been right where you are,’” says Reynoso, who led a Saturday group during her second semester at St. Edward’s. “Seeing that my own story meant something to them gave me even more confidence to open up and try to connect with them.”

Many St. Edward’s students also serve as Breakthrough summer fellows, where they teach local middle and high schoolers alongside other college students and Breakthrough alumni. After two weeks of intensive training, the fellows lead six-week sessions at schools in Austin, Manor and Del Valle independent school districts in core subjects like math and language arts, and in electives that help students explore interests such as art or fashion.

“Sometimes you’re standing up there and the kids won’t listen, or someone’s being disruptive, or your lesson is not getting through to them,” says Reynoso, who has been a summer fellow with Breakthrough twice. “You just want to cry, but you know you can’t. You have to figure it out and keep going.”

Kasie Guzman ’23 knows that frustration well. With one summer session under her belt, the aspiring teacher already has a few classroom-management tricks for keeping the students she is teaching engaged, like quick walks on a nice day, call-and-answer cheers, and icebreaker games of Uno before school. She also looks for creative ways to present lessons, like “trashketball” contests with crumpled-up paper to illustrate fractions and percentages: 4 out of 5 shots made equals 80 percent.

“I’ll try anything if I think it will motivate my students,” she says. “So many kids who are part of Breakthrough have a lot to worry about at home, and sometimes a teacher or a counselor who always shows up is the only consistency they get. If I’m not energetic, I certainly can’t expect them to be.”

Guzman, a Breakthrough student herself, understands this better than most. She joined the program as a 6th grader at Fulmore Middle School (now Lively Middle School) and has relied on her Breakthrough mentors to help her through her mother’s incarceration and conflicts with her stepfamily, as well as challenges applying to college and securing financial aid. “If you have people in your life who will find any way to be there for you,” she says, “you never feel alone, especially when you want to give up.”

Alumni of Breakthrough who are currently attending St. Edward's

Breakthrough students with degrees from St. Edward’s since the program began in 2002

A Day at St. Edward’s

Proving the Power of Social Work